The attacks have now ceased, for the moment at least. The attacker may have given up as the second wave of attacks have had little impact on the network.

Whether anyone will pursue the attacker is unknown at this point in time. The attacker could be the same USD 50 million The DAO hacker, or someone who wants us to think that. Some of the attacking accounts donated a few Classic ethers (ETC) to the Ethereum Classic development account, the same account The DAO hacker contributed 1,000 ETCs to when they had access to their booty. And both attackers made the same measly order of donation to the Ethereum Classic development fund.

One positive aspect of these attacks is the improvement of the security of the Ethereum network while still in it’s early phase.

Overall, the Ethereum network kept on chugging along despite the repeated attacks. Many nodes crashed in the first attack, but due to the diversity in node clients, the network continued running. With the spam transaction attacks, node clients were slowed down especially nodes with limited RAM and non-solid state storage. With the many millions of empty account attack, node clients were slowed down further. Users had trouble syncing their full node wallets. Transactions could not be submitted with normal fees – some transactions fees were raised up to 45x the normal fee as this prioritises the transactions. Large smart contracts could not be deployed as the miners were advised to lower the gasLimit to reduce the effects of the spam transactions. Some miners started mining blocks with zero transactions for fear of slowing down their nodes. But the network kept on chugging along and hopefully will continue to do so. A very nice resilient network decentralised over 7483 nodes.

If you care to carry on investigating let me know if I can be of any help.

Click here for /r/Jey_s_TeArS's "quick analysis".
Hope it helps, I had great fun in Shanghai with you guys…

edit bis: looks like the attack is now (2315287) slowing down last tx to the contract involved was made 1 hours ago . Some the adresses listed below also interacted with what looks like a copy of the attacking contract https://etherscan.io/address/0x0c40cf6dd1b74c6edfc4729021a11f57b31e3c27

edit: I guess due to the pools and miners adapting their gaslimit and gasprice the tx fee of the attacker is now up to 0.03465 (+28%)

There are 10 address calling the contract that have the same pattern of creation, those addresses where all loaded from Poloniex between 2300996 and 2301016 :

Furthermore those 3 addresses are also related to the contract and probably used for testing, receiving funds 6 days ago around bloc 2278648 :

This “testing addresses” lead to this contract address : https://etherscan.io/address/0x45FAeC35E32676568ad827AEa17FB7431EF390bC the address that created currently used contract (0x0c35a2e…) interacted with it.

IP addresses are known a long time ago, I write also to ethcore-team ISP of attackers. But how can it help?

Update 01:18 Oct 22 2016 UTC – A Perl script and the raw data for the 6 known offensive contracts is available in github.com/bokkypoobah/EthereumNetworkAttackData.

Posted on reddit/r/ethereum – The Ongoing Ethereum Attacks (Work In Progress) and Hacker News.

The First Wave Of Attacks

The first attack started on block #2,283,416 at Sep-18-2016 06:04:56 PM +UTC (01:04:56 Sep 19 Shanghai time) and targeted the go-ethereum geth clients, causing a memory error and shutting down these nodes across the network. Part of the design of the Ethereum network is the diversity of node clients. While geth (implemented in Go) crashed, Parity (implemented in Rust) and EthereumJ (implemented in Java) kept the network running.
geth – From Shanghai, with love (v1.4.12) was released on Sep 19 with the these code change.

The offensive transactions were both:

The attacker sent low cost transactions to create many millions of empty accounts on the Ethereum blockchain, slowing down the processing of the Ethereum node clients.

Update 05:55 Oct 23 2016 UTC – First estimate of the number of accounts created by the SUICIDE opcode is 19,041,840 by retrieving the information from Parity. The original estimate was manually computed by viewing the transactions in etherscan.io, which did not pick up most of the empty accounts. Compare to 777,647 real accounts. That’s why your syncing has been taking such a long time.

User /u/arrnx on the reddit post The Ongoing Ethereum Attacks (Work In Progress) provided two address involved in the creation of the many millions of empty accounts:

The Second Wave Of Attacks

As reported in Lol, I think its another attack contract – Burns fees like a champ. Somone is very persistent here 🙂, a new wave of attacks commenced less than a day after the Gas Reprice hard fork involving the two following contracts:

The Second Wave – The First Contract 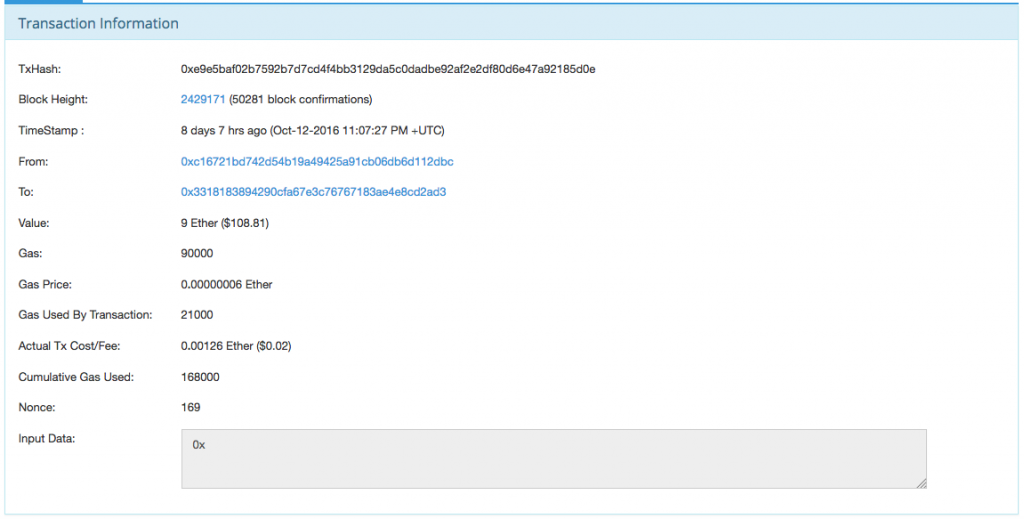 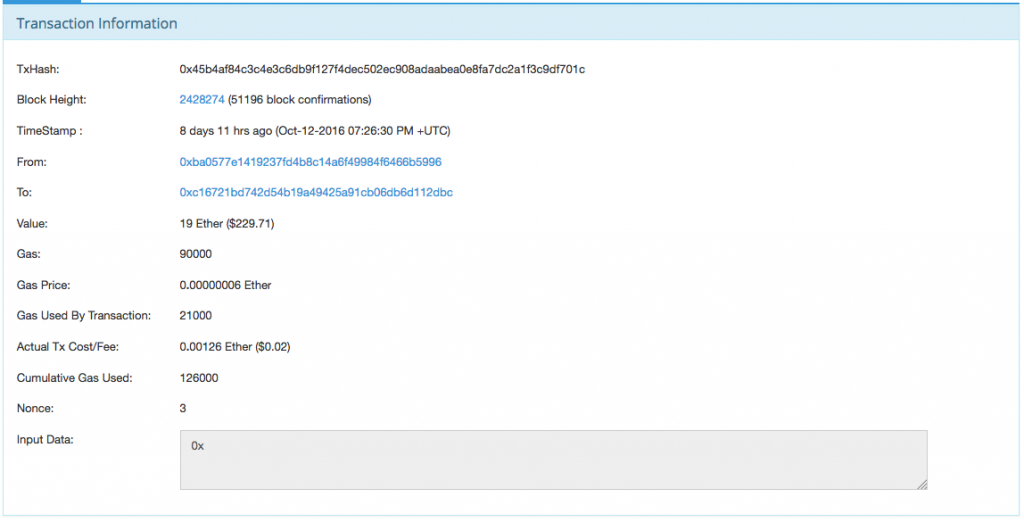 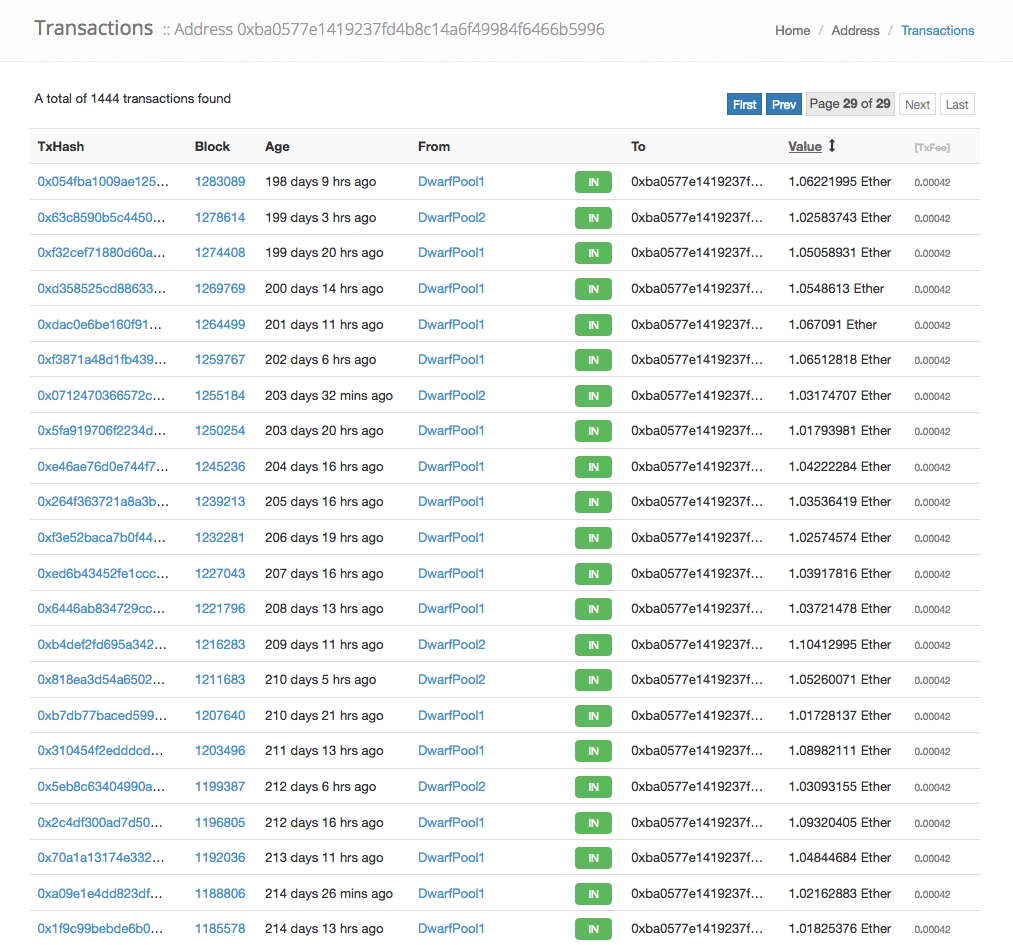 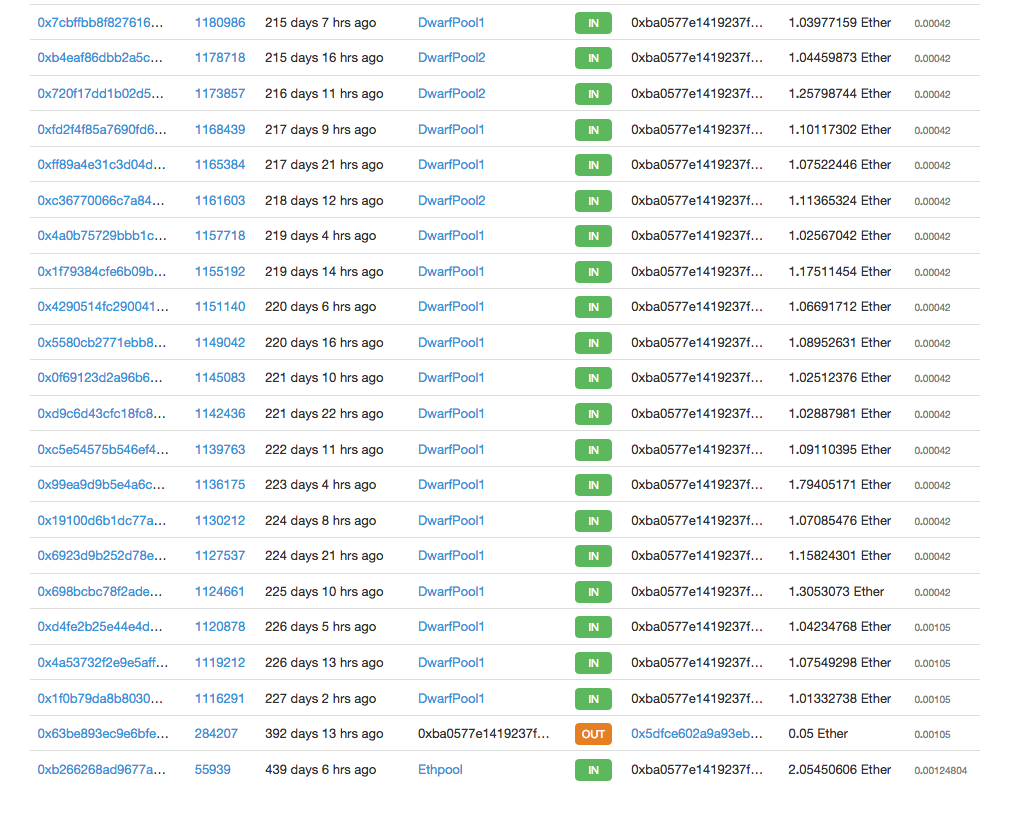 Some of these pools require IP addresses that the miner is mining from to confirm the miner’s credentials.

EthPool requires IP address confirmation for change in account setting, and stores the miner’s IP address and would therefore have an association between the miner’s account and IP address:

And here is the attacker’s statistics from DwarfPool: 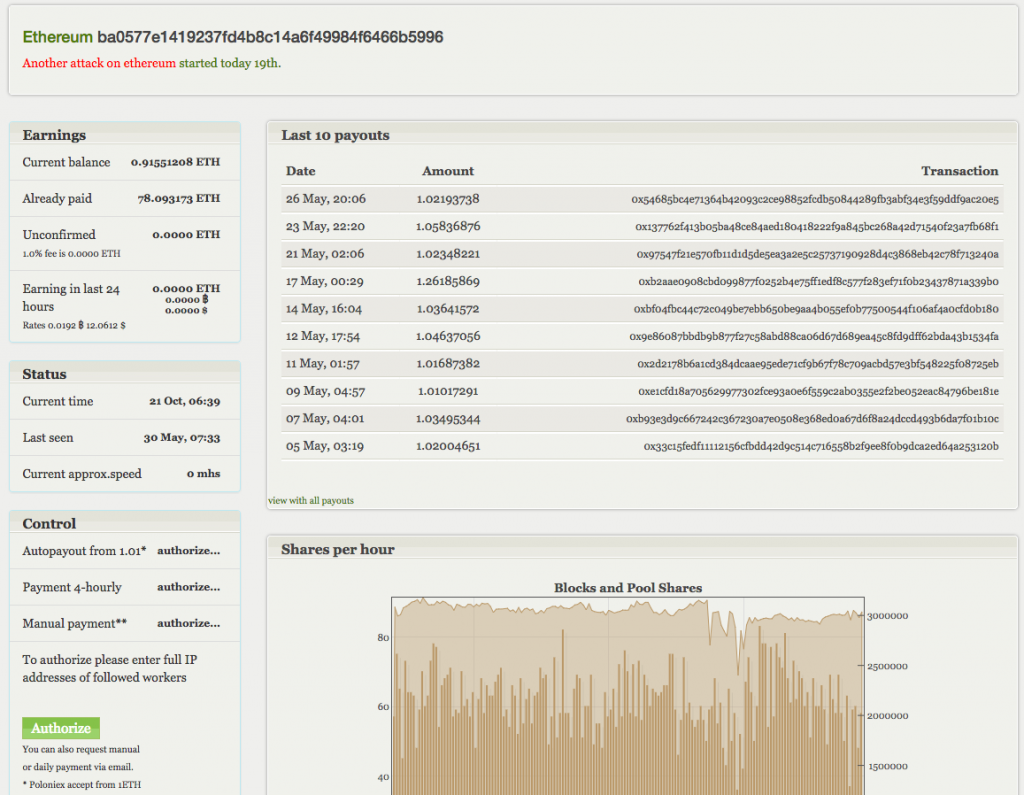 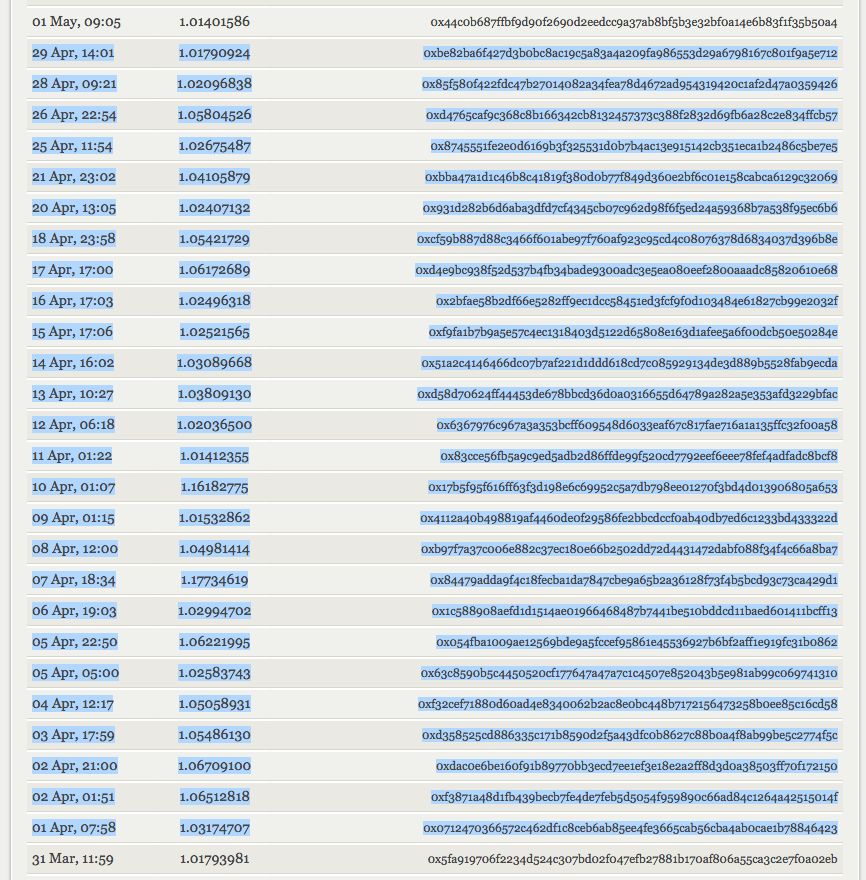 User /u/tsunamiboy6776 asked on First Ethereum hard fork successful; second imminent “How could the ip be used? Couldn’t be using a proxy or vpn?”.
The attacker could use a proxy, VPN or ?TOR to hide their IP address, but it is highly unlikely they would have done so. It is far easier to hide the association between your IP address and your Ethereum mining rewards account just by solo mining. And this pool mining was conducted before the idea of The DAO was floated, with the juicy USD 50 million bug in the code. The attacker could have planned these attacks well in advance, but why would they bother pool mining if they could just solo mine anonymously with higher profitability compared to pool mining via a proxy/VPN/?TOR that adds some latency in the pool mining process?

I think it was a slip up using a traceable account to mount the attacks.

So my guess would be – a C, C++, Java, Assembly Language developer, mid 30s to mid 40s, male, small time miner with the rig small enough to fit in the unit or house, basement or garage, 5 foot 8 inches, long hair :-). And the IP address will point directly to the attacker’s home, but someone will have to get the IP address from DwarfPool and then find out the physical address or owner from the ISP. I don’t know whether the three-letter-acronym agencies would bother. We could set up a prediction event on Augur or Gnosis and place our bets.

The Ethereum Classic And The DAO Hacker Connection

It hasn’t come up yet in the thread, but 15 hrs after the attacks finished they dumped into account 0xe9a7e26bf5c05fe3bae272d4c940bd7158611ce9 . This is our public etc dev account, and is not involved with the attack. The funds received will be frozen, same as the dao funds received as far as I’m concerned.

A lone operative could easily have been behind the attack as the sending out of the spam transactions can be easily automated.

Meanwhile, multiple people were banned for a day from the Polo TrollBox while overexcitedly discussing whether the attacks was the work of “coordinated spam or lone operative”.

This entry was posted in Blog and tagged Attack, Ethereum. Bookmark the permalink.