Using The Ledger Nano S With MyEtherWallet, Go Ethereum and Parity, Without Chrome

MyEtherWallet With Firefox
The Ledger Nano S works well with Firefox with the U2F addon and MyEtherWallet without having to use Chrome for any configuration. You need Browser support enabled to use the Nano S with MyEtherWallet.

geth 1.5.9 1.6.0, Install Nano S 1.3.1 Firmware
geth (Go Ethereum) v1.5.9 did not recognise the Nano S correctly, so I had to install the developer v1.6.0 version and the Nano S was then recognised. The next problem was that I had to install a new version 1.3.1 firmware on the Nano S in order to authorise EIP155 (replay protection) transactions in geth. I had to install the open source Chromium (not the proprietary Chrome) on my Linux machine to update the firmware, and had to set some udev rules to enable connectivity with the Nano S. You need Browser support disabled to use the Nano S with geth.

Testing The Mnemonic Key Derivation
I tested the Nano S mnemonic key derivation against two HTML/JavaScript software implementations. The first failed and the second passed. I am now comfortable using the Nano S as the same derived Ethereum private keys can be generated through the HTML/JavaScript page from the same mnemonic phrase. My ethers and ERC20 tokens will be much safer using the hardware wallet.

I used the same mnemonic phrase into MEW’s Mnemonic Phrase wallet and selected the m/44’/60’/0′ (Ledger) HD derivation path and MEW produced the same set of keys as the Nano S. You can therefore access all your accounts from MEW using the same seed phrases – only use this method if you are on a secure offline computer.

ERC20 Tokens
The Ledger Nano S works well with ERC20 tokens on geth (1.6.0 develop) with or without Ethereum Wallet / Mist, MyEtherWallet and Parity (limited to one account currently). You will need the Contract data setting to be switched on to be able to transfer ERC20 tokens from the Nano S account. 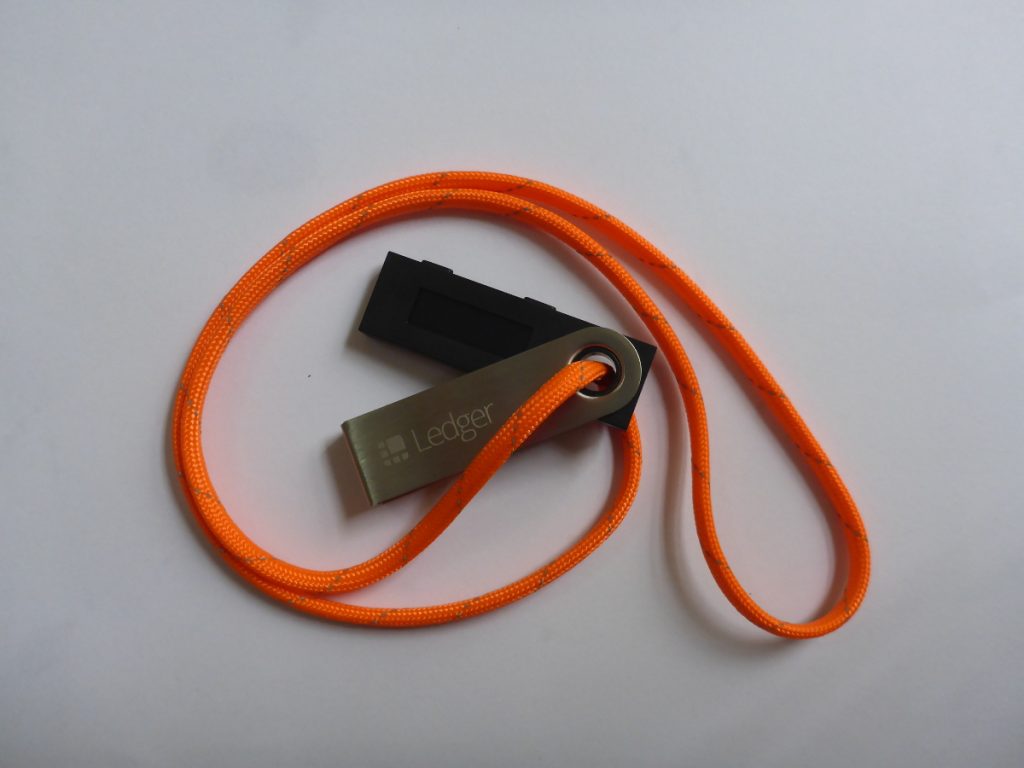 Ledger Nano S. The supplied lanyard is too flimsy, so my Nano S is attached to a 7 core paracord with a 200+ kg minimum breaking strength. I have tied a figure-of-eight knot in the middle of the lanyard as it is not intended to be worn around necks, being stronger than the standard human neck.

The Ledger Nano S by default requires Chrome to interact with the Ledger apps and https://www.myetherwallet.com.

I avoid using Chrome as I don’t want to give any more data to Google than I have to.

Based on the information in the Reddit post above, I ordered 2 x Nano S via the affiliate link on https://www.myetherwallet.com. One device for use and one device for a backup. Ordering the Nano S through the affiliate link is a painless way to support the MEW team with a few additional keystrokes and clicks. My order was placed on Mar 8 2017.

It is still the morning of Mar 10 2017 in Sydney and I received a surprise package delivered to my doorstep. It was my 2 x Nano S from Ledger’s Fulfilment Center in Sydney, in 2 days. The housing is sturdy, the two buttons are crisp to click, and it does not have the loose swivel cap reported by some people on the Reddit forums.

I open one of the boxes, and connect the Nano S to my Macbook Air (yeah, I’ve got privacy issues with this too) with the supplied USB cable.

Using one or both of the two buttons on the side of the Nano S I:

I then selected the Ethereum icon on the Nano S screen and changed the following settings:

I installed the U2F addon https://addons.mozilla.org/en-US/firefox/addon/u2f-support-add-on/ into my Firefox browser. From the U2F addon Github repository, the U2F addon should work with OS/X, Linux and Windows.

Without restarting Firefox, I navigated to https://www.myetherwallet.com/#send-transaction. I selected the Ledger Nano S on the left hand of the screen and clicked on the Connect to Ledger Nano S button:

And got the following screen that gives me a scrollable list of Ethereum accounts secured by the 24 word HD mnemonic phrase on the Nano S: 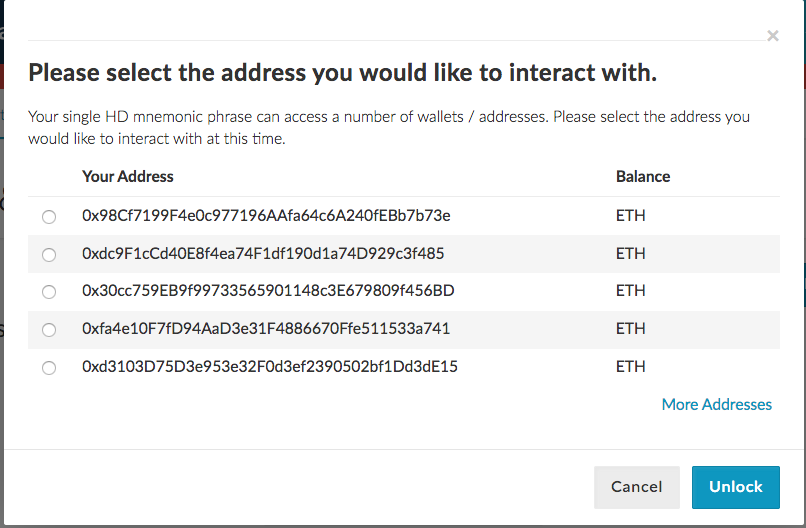 I selected one of the accounts, and it seems to be working. 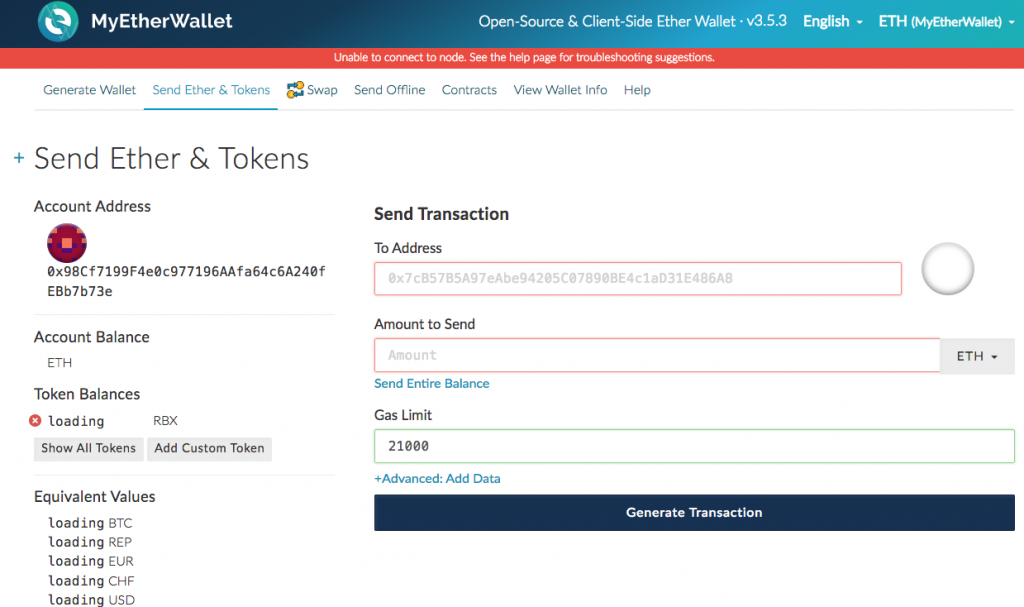 I upgraded geth, my Go Ethereum client, via Homebrew to Davy Jones’ Locker (v1.5.9). I restarted geth and got the following error:

Based on Update: macOS users reported permission issues where the kernel denied Geth accessing the Ledger., I downloaded geth v1.6.0 for the macOS from https://geth.ethereum.org/downloads/. I then got a message that seems to imply that the connection to the Nano S was successful:

When I tried to send a transaction from the HD account, I got the following error:

The Nano S 1.3.1 firmware and the Ethereum app 1.0.3 need to be loaded on the Nano S to sign the geth transactions. And this requires the Ledger Manager application that runs in Chrome or Chromium.

4. Chrome In A Virtual Machine To Upgrade The Firmware

So I really have to run Chrome to run the Ledger app to update the firmware from v1.0.2 to v1.0.3? I fired up a Windows XP VM in a VirtualBox host running on Ubuntu Linux. But the USB device was not recognised by the VM host, so I skipped this VM Chrome installation option.

5. Ledger Manager In Chromium In Ubuntu

I then tried installing Chromium (the open source version on which the proprietary Chrome is based on) in Linux to run the Ledger Manager.

I installed Chromium using the commands

In Chromium, I loaded the Ledger Manager from https://chrome.google.com/webstore/detail/ledger-manager/beimhnaefocolcplfimocfiaiefpkgbf.

But the following screen was displayed. Unplugging, plugging and entering the PIN did not resolve the issue. 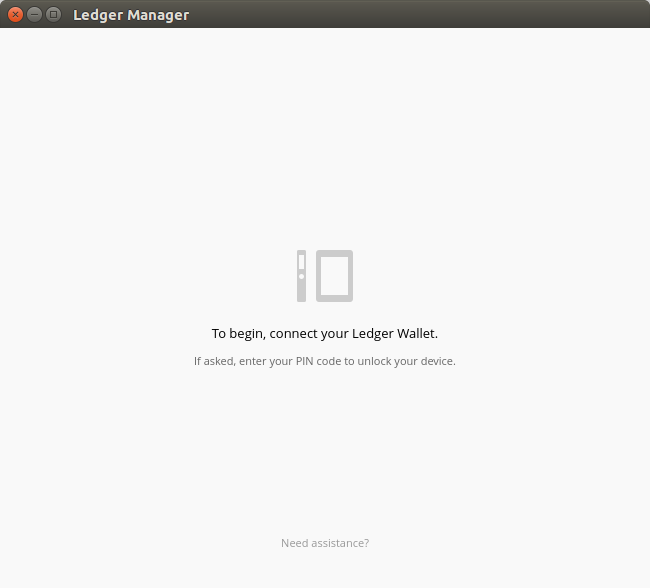 6. Nano S Not Recognised In Linux

First I checked if the USB device was recognised. From /var/log/syslog:

From What if Ledger Wallet is not recognized on Linux?, I would need to create a set of udev rules to allow access to the device on Linux:

I would need to add my user to the plugdev group using the command:

Unplugged, plugged, entered the PIN but Ledger Manager was still not recognising the Nano S.

So I added the following two statements to /etc/udev/rules.d/20-hw1.rules:

Success! After unplugging and plugging back the Nano S, the Ledger Manager application now recognises the Nano S: 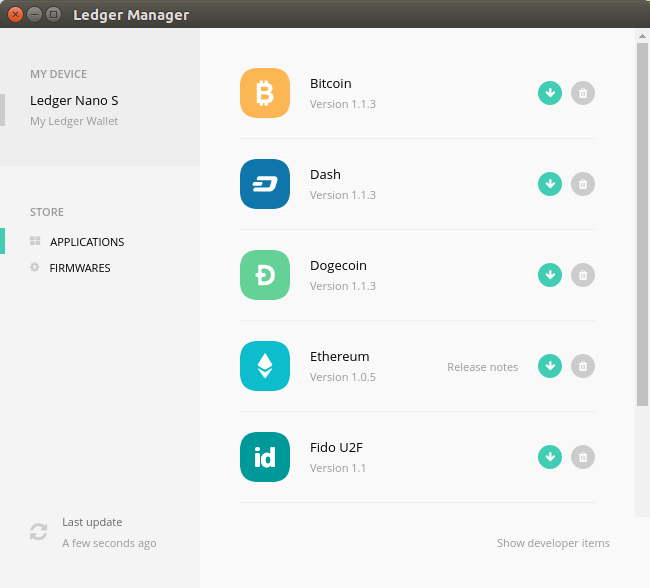 Unfortunately, updating the firmware requires the recovery phrase to be entered again: 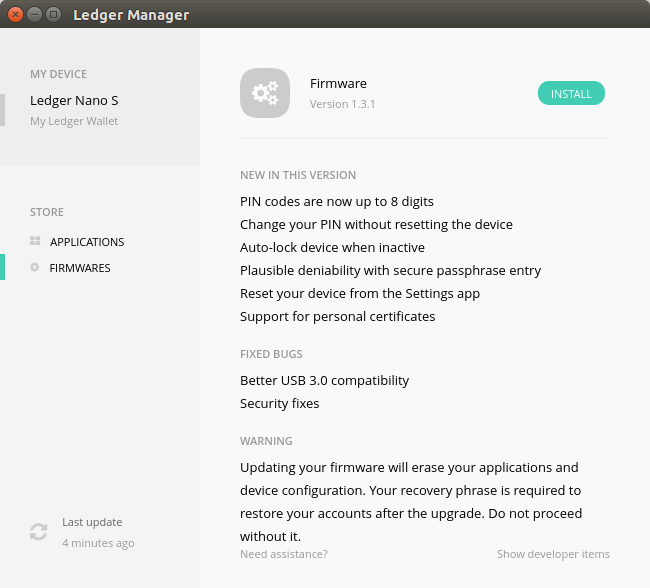 I clicked on the Install button, and the following screen was displayed: 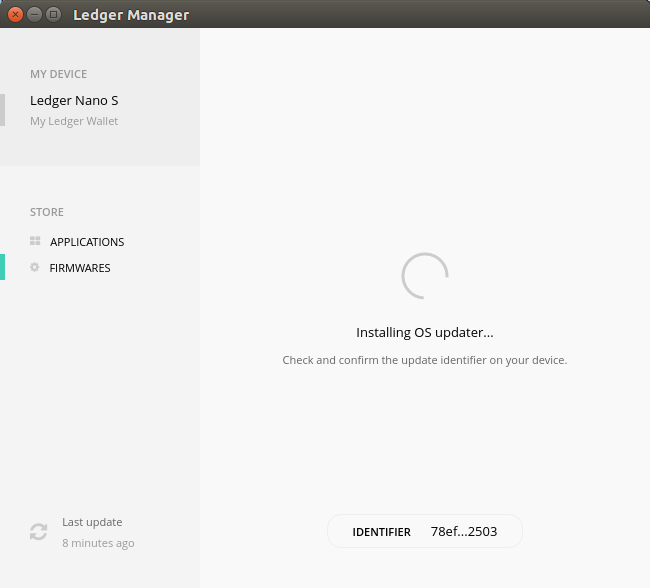 After many minutes, I got a failure message. How tedious. 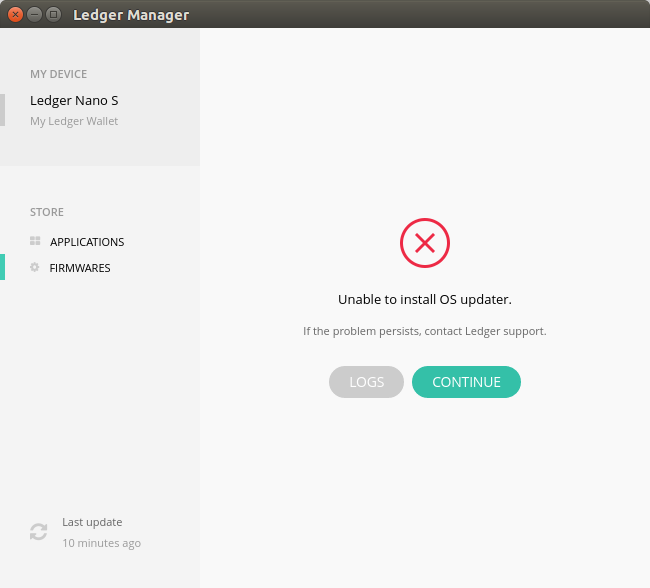 Ok. I saw what needed to be done. The Nano S device was prompting for a confirmation to install the new firmware. I clicked the second button on the device, and there was a message “Update” displayed on the Nano S screen. The device displayed a “Processing” message, then finally a message “Press both buttons to begin”.

After 10 minutes of entering in my PIN and the 24 word recovery phrase, I got the message “Your device is now ready”. Phew.

No. It’s not quite over yet. I tried to install all the application available in the Ledger Manager screen, but the Nano S ran out of space.

Back in geth, after setting Browser support to false, I tried sending a transaction:

I wanted to test that I could recover my derived keys using the same mnemonic phrase in case I lose my Nano S or decide not to use it. 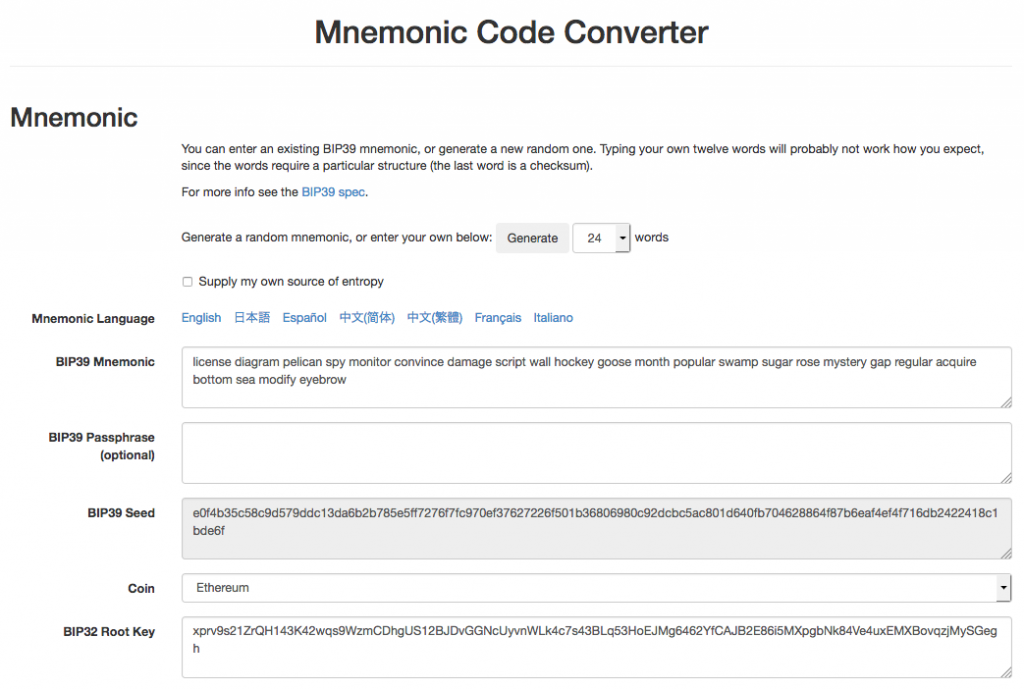 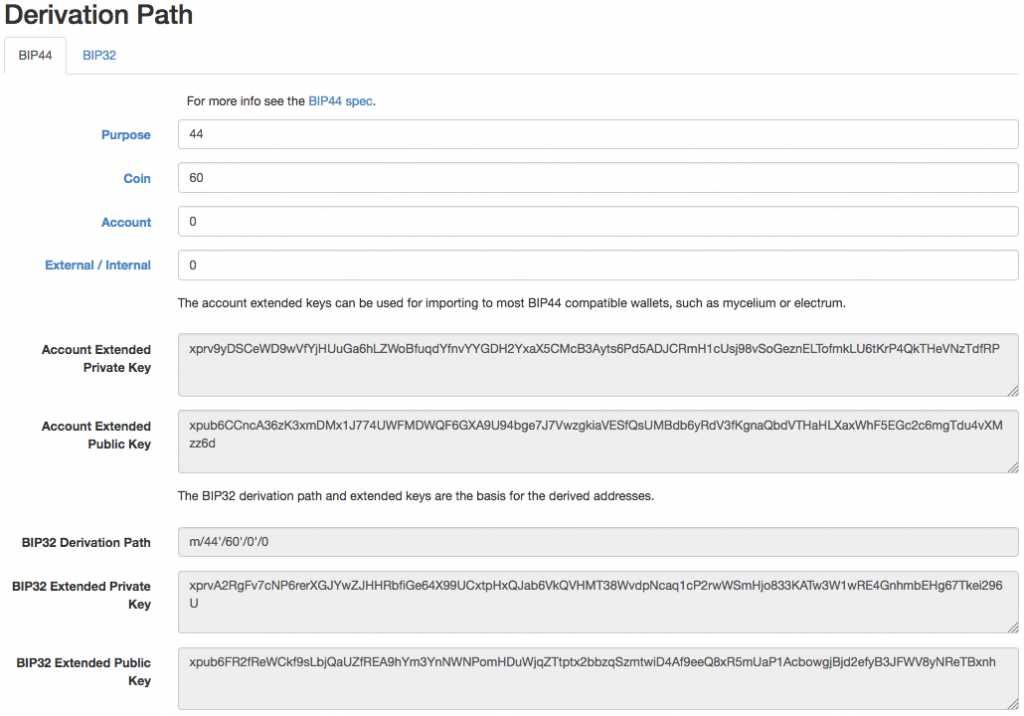 The following screen shows the keys derived by MyEtherWallet:

Note that geth only reports the first unused derived key.

To have the confidence when using my Nano S, I need to know that the keys can be derived by a separate process.

I searched the net and from Restoring your Ethers (ETH or ETC) without a Ledger Nano S, I got the link to https://github.com/btchip/bip39/tree/ledger-ethereum. So I cloned the repository, selected the correct branch and compiled the code:

(IMPORTANT: Only use the following on a secure and offline computer, or for testing with throwaway mnemonic phrases.) 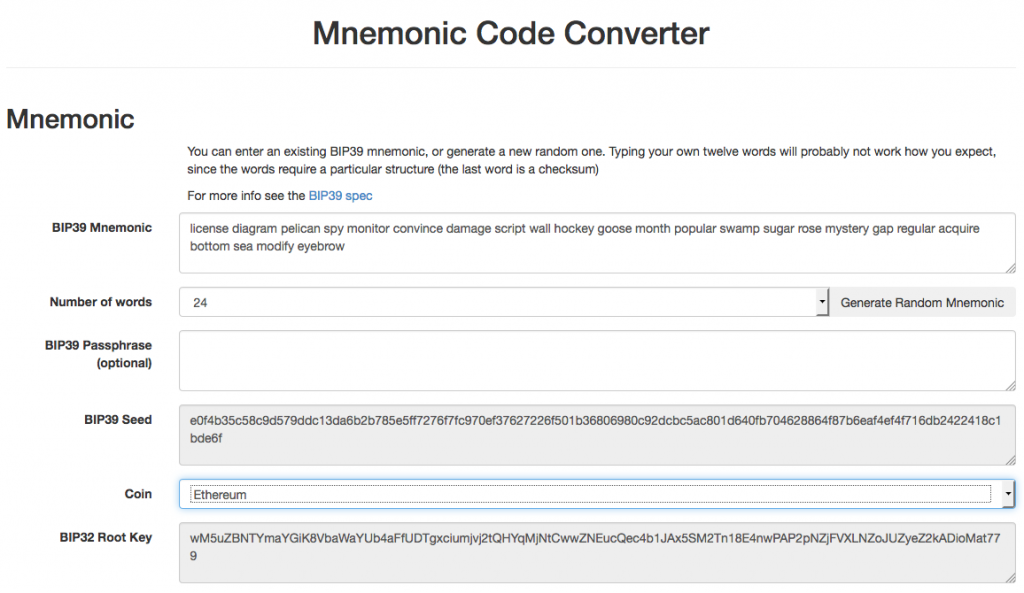 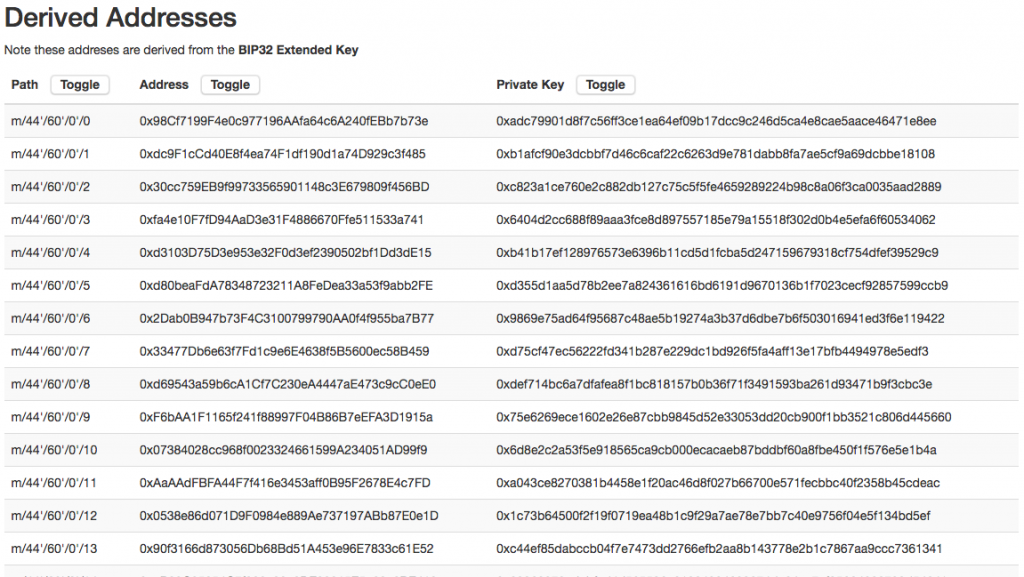 The following screen shows the keys derived by MyEtherWallet:

And geth‘s first key that matches the software above and MyEtherWallet’s first key:

Here are the main differences between the failing first https://iancoleman.github.io/bip39 and passing second https://github.com/btchip/bip39/tree/ledger-ethereum repositories. 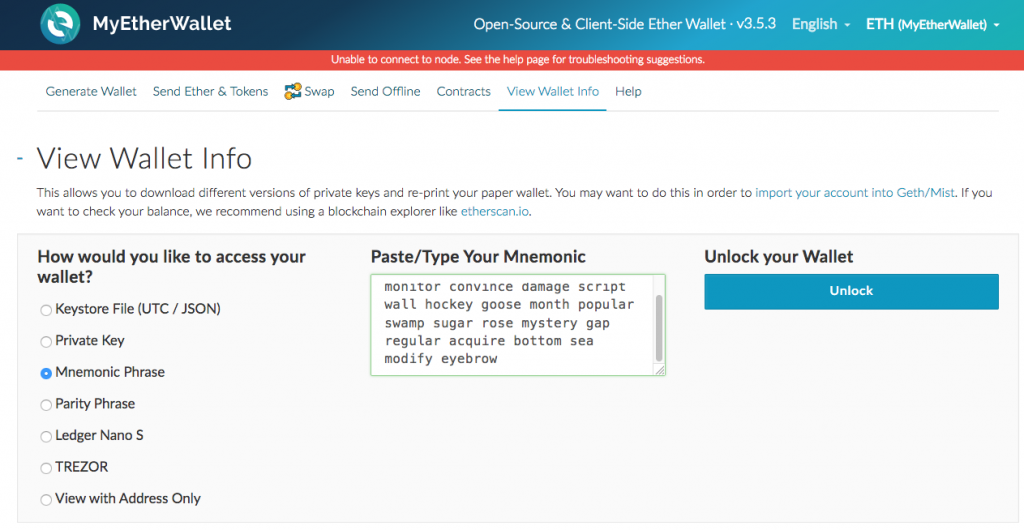 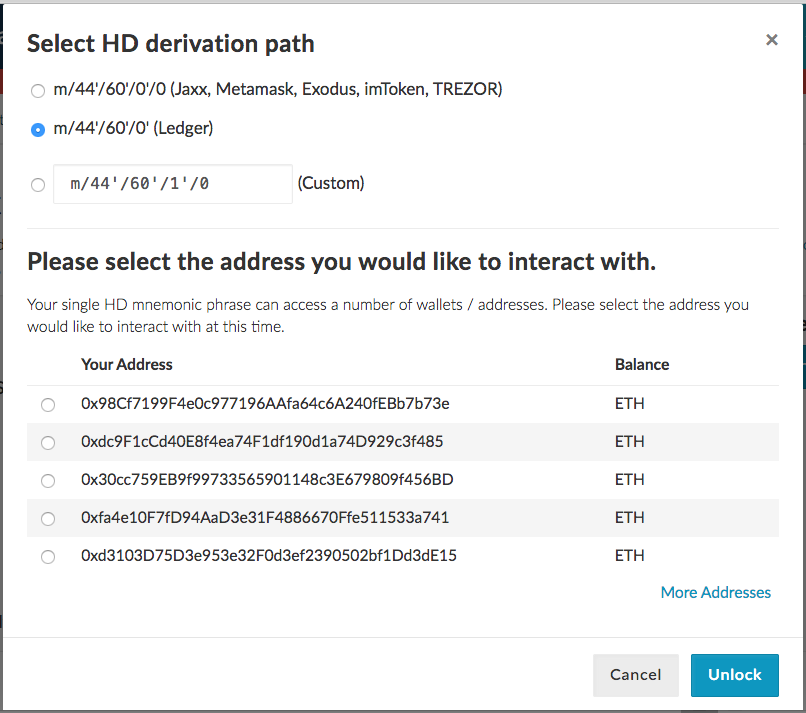 I am now comfortable using the Nano S as the same derived Ethereum private keys can be generated through the HTML/JavaScript page in 8. above and MEW from the same mnemonic phrase. My ethers and ERC20 tokens will be much safer using the hardware wallet.

Nice work Ledger, the MyEtherWallet team and the geth team!!!

10. Comparing The Key Derivation With The Trezor, Using MyEtherWallet

Here is the screen from MyEtherWallet showing the addresses derived using the Trezor: 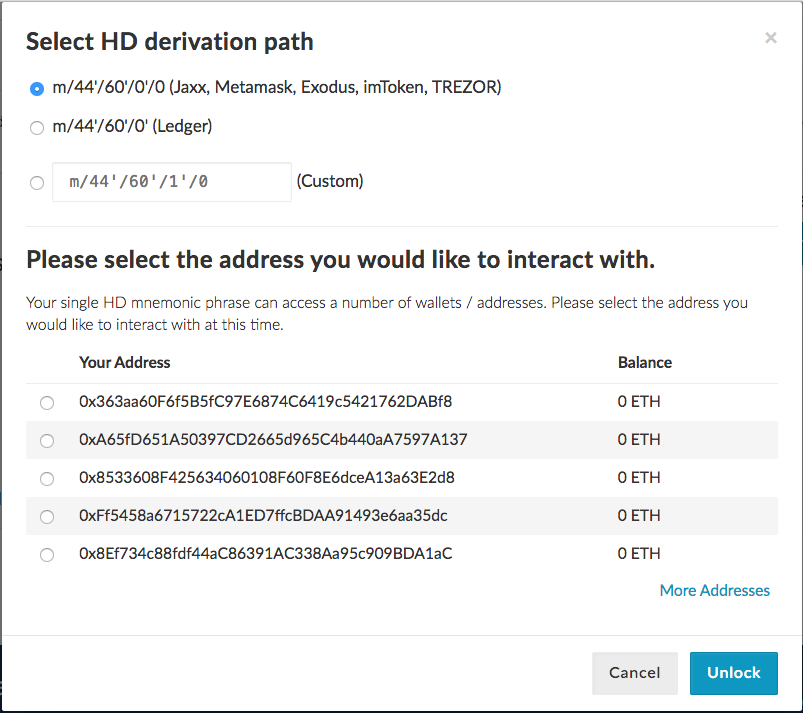 And here is the screen from MyEtherWallet showing the addresses derived using the Nano S: 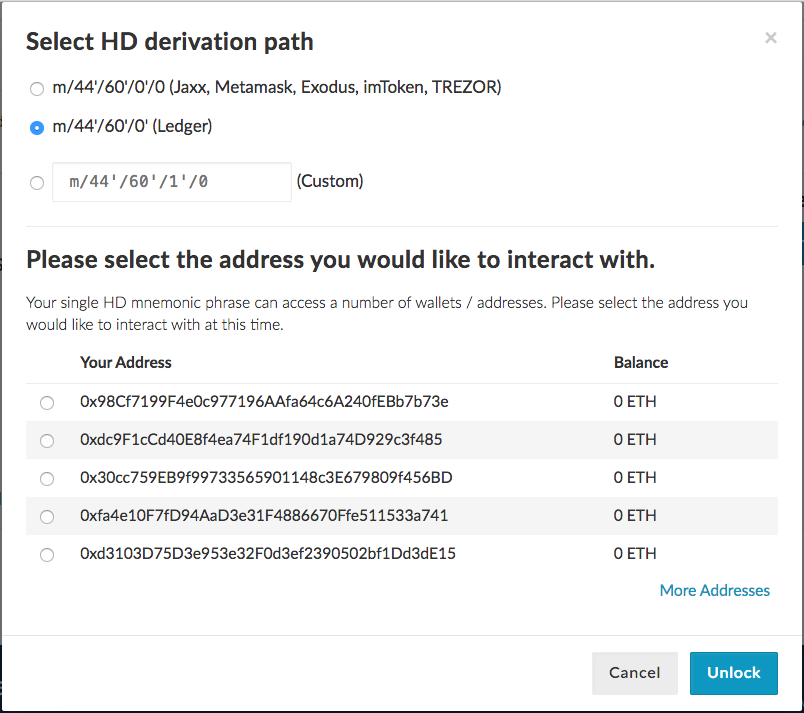 So you cannot use the Nano S seed with the Trezor to derive the same accounts.

I wanted to see if Parity supports the Nano S, so I downloaded and compiled the new version of Parity 1.7.0 on my Macbook using the following instructions:

After the compilation, I ran parity on the Ropsten testnet using the following command:

I opened up the Parity browser page on localhost:8080 and navigated to the ACCOUNTS tab and found my NANO S hardware account on the page:

A good start. I transferred some testnet ethers to my Nano S account.

While waiting for Parity to sync, I transferred 10 Ropsten ETH to my first Nano S account, and found it using MyEtherWallet on the Ropsten network: 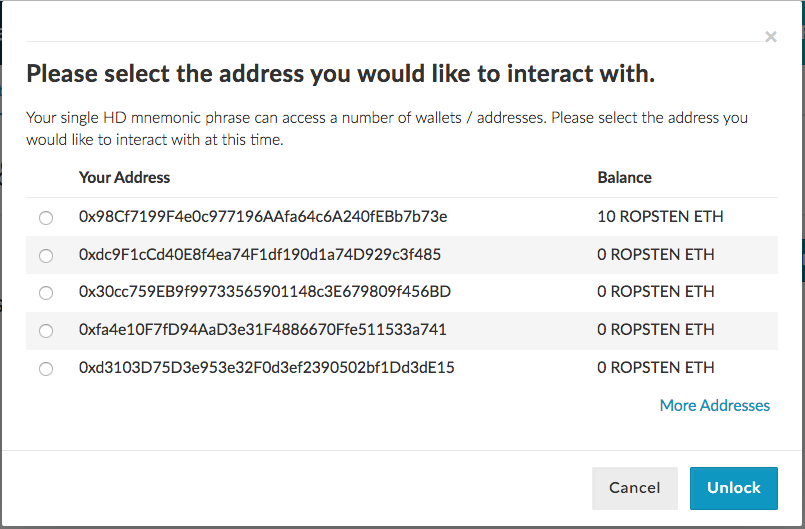 This entry was posted in Blog and tagged Ethereum, Hardware Wallet, Wallet. Bookmark the permalink.